Let it never be said that Facebook is a waste of time! It all depends whose pages you follow. I follow Rabbi David Wolpe's inspiring posts every day. Today not only his post inspired me, but also one of the comments posted below it, a quotation by another great rabbinical sage: Abraham Joshua Heschel. So I created a lesson for a new book I'm planning, featuring writing lessons to evoke introspection. Let me know what you think of this:


“Sometimes in the quiet of the night you listen and realize that the chords struck in your soul differ from the music of those around you. The trick of life is to hear those same internal chords amid the clamor and insistent noise of the day. Hold fast to your harmonies.” --David Wolpe


“There are alleys in the soul where a man walks alone, ways that do not lead to society, a world of privacy that shrinks from the public eye. Life comprises not only arable, productive land, but also mountains of dreams, an underground of sorrow, towers of yearning....” --Abraham Joshua Heschel

What does each passage mean, in your own words?

How do these two passages differ in tone?

Which one resonates more for you, and why?

Write a short story or poem titled “Holding on to Harmony” to illustrate Wolpe’s message.

Or, write a short story or poem titled “Lonely Landscape of the Soul,” featuring the borrowed images, from Heschel, of “mountains of dreams,” “an underground of sorrow,” or “towers of yearning.”

Be sure to credit the author with a parenthetical citation, as follows: (based on words by _______).

Teaching About Writing Style via Emulation and Reflection


An awareness of writing styles is the first step in developing one's own literary style. I teach students not only to comprehend what's going on in a story, but to analyze the specific word choices in terms of how they mold the entire reading experience. One of my favorite ways to evoke critical thinking regarding the style of a literary work is to assign exercises in emulation of that work.

Using opening pages from two YA novels--Fade, by Robert Cormier, and Gone, by Michael Grant--I asked middle-school students to compare the writing styles for clues about the following: the genre and time period of each book, how recently each was published, the mood established by the openings, the points-of-view, and the pacing of the narrative. A discussion led students to determine that Cormier's first-person opening, with its "retrospective narration" (new vocabulary for them), suggested that the genre was either historical mystery/fantasy, while Grant's third-person omniscient narration seemed classifiable as contemporary suspense (or possibly sci-fi/fantasy). The narrative styles--Cormier's narrator's recollections versus Grant's "real-time" narration--made some students label Cormier's book as "more telling than showing, even though it's descriptive," and others label Grant's as "more like a movie, based on dialogue, but not requiring as much thinking from the reader." (I gave them another new term for their vocabulary lists, "cinematic," after that last comment.) They guessed, correctly, that Cormier's book was published long before Grant's (20 years before), and that the mood both authors had set was one of mystery, with added suspense in Grant's. Cormier's first-person point-of-view allowed these young readers to be pulled into the narrator's world through his thoughts and actions, in that order, while Grant's third-person omniscient point-of-view compelled readers via the actions of the protagonist as much, or more than, his thoughts. Regarding the pace of storytelling, one student argued that Cormier's slower pace "pulls me in gradually, the way I like to get pulled into a story," while another student declared that Grant's faster pace "immediately puts me in the scene with the main character and makes me HAVE TO READ MORE."

With all of those observations recorded in their notebooks, I then posed a question for my students to ponder: "Which kind of writing comes more naturally to YOU?" But I didn't want them to guess the answer to that question. I wanted them to DISCOVER the answer, via emulating each style.

So, I asked them to participate in an experiment: to write two of their own story openings, with each one borrowing the first lines from Fade or Gone and altering those borrowed lines with their own substituted words. For example: Cormier's opening words, "At first glance, the picture looked like any other...," changed to "At first glance, the ____ looked like any other...." Students plugged in their own nouns, which would evoke very different kinds of stories. The opening of Grant's novel is "One minute the teacher was talking about the Civil War. And the next minute he was gone." I told my students to delete "about the Civil War" and find substitutions for "teacher"and "talking." Hence, their borrowed fill-in-the-blank line from Gone would read: "One minute ____ was ___ing.... And the next minute he/she was gone."

The next part of their experiment to determine their most natural fiction writing style began with my instruction: "Take each adapted story opener and now write a compelling first page of your own novel, in the style of the original work it is derived from: either in a first-person, retrospective, literary style, or in a third-person, omniscient, cinematic style. Maintain the same verb tenses, the same kind of pacing, and the same genre."

The lesson required two 90-minute sessions for the initial comparative discussion of the opening pages, followed by the writing, sharing, and revising of their opening pages. Finally, I asked them to compose a reflective short essay with this suggested topic sentence: "Writing fiction in a style that is ______,____, and ____ poses challenges that writing in a style that is _____,______, and _____ does not." Using quoted examples from both of their own new pieces, they then illustrated and analyzed why they prefer one style of writing fiction over another.

Thus, they learned by emulating stylistic techniques, not just writing theoretically about their preferences. In the end, I pointed out that this exercise illustrated yet another application of my constant advice to "show, don't tell" with memorable words.

Assume They Can and They Will


In one of my small group classes last week, I gave 9-year-old Daniel and his two classmates the following short passage from To Kill a Mockingbird as an example of how a writer can establish the setting, tone, and time period of a story: "They ambled across the square, shuffled in and out of the stores around it, took their time about everything.... There was no hurry, for there was nowhere to go, nothing to buy and no money to buy it with.... But it was a time of vague optimism for some of the people: Maycomb County had recently been told that it had nothing to fear but fear itself."

Now, I do know that Harper Lee’s book is not for elementary school students, due to the disturbing events in the plot; and I would never recommend the whole book to preteens, no matter how able they are as readers. But when I want to teach about specific, powerful writing techniques, I use age-appropriate passages that exemplify the best writing, not simply books marked with a specific grade level label. I would rather aim high with my curricula and see how much my students can retain, while introducing them to excellent authors whose works they will rediscover in later school years and delight in reading, as if reconnecting with old literary friends. High standards and hopes for my students always yield high achievements, I have found.

So…when I asked Daniel what the passage from TKAM shows about the setting, tone, and time period of the story, he blurted, "OH! I think it's during the Great Depression, because the last line uses an ALLUSION to what the President said during the Great Depression--I think it was Franklin Delano Roosevelt--so the people would have hope in that sad time. Yes, see here—” he pointed to the text—“in this line about 'vague optimism,’ that's what he was trying to give the people... And yes, yes, see here how it says they had ‘nowhere to go, nothing to buy, and no money to buy it with’? Definitely it’s during The Great Depression!" And then Daniel practically pounded the table as if saying, "I rest my case, Your Honor," beaming proudly!

I popped my eyes back into my face, and forced my slack jaw to speak: "ALLUSION? Wait, how did you know--"

"YOU taught me that, Mrs. Lipson!"

"Only once--in passing! I didn’t expect you to remember the term, let alone apply it like that! And how do you already know about The Depression and FDR?"  I was laughing at that point.

He laughed, too, then shrugged and grinned. "I just do. I don't know. I probably read it somewhere."

I hope that Daniel will quote Harper Lee when he gets to high school English, and when his teacher asks, “How do you already know about To Kill a Mockingbird?”, he will reply, “I probably read it with Mrs. Lipson.”
Posted by Susan L. Lipson, Author & Writing Teacher at Sunday, October 14, 2012 No comments:

For Your Vocabulary-Building File! 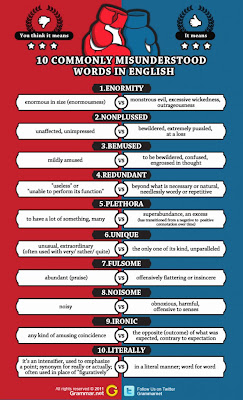 Writing Between the Lines

In Kathryn Stockett's beautiful novel THE HELP, she reveals character by showing the contradictions between a character's spoken words and her actions, letting the reader understand the character in depth via what she leaves unsaid. For example, Minnie mouths off to her dimwit, yet sweet employer, speaking disdainfully about Miss Celia, as if she cares only for the job and not at all for the pitiable boss. She denies Miss Celia's assertion that they are friends. But when Miss Celia falls ill and collapses onto Minnie's shoulder, Minnie states off-handedly that tears spring into her eyes, even as she quips that she is not sure what the maids' rules are regarding responsibilities for white ladies dying on top of them. The reader can see through Minnie's false bravado without Kathryn Stockett having to tell us that Minnie has a soft spot in her heart for Miss Celia. That kind of writing, the kind that shows rather than tells, shows respect for the reader's analytical abilities. That is what I consider ENGAGING writing, the kind that readers remember because they had to interact, in a way, with the characters, rather than merely absorb the author's interpretation of the characters.

If Kathryn Stockett had written, "But Minnie was hiding her sympathy for Miss Celia, of course," I would have rolled my eyes and thought, "Gee thanks, I would never have figured that out on my own...duh!" But this author did not overwrite as beginners often do, and for that I thank her and offer her as an example for aspiring novelists to study. I must point out that her choice to use multiple first-person narrators, instead of an omniscient third-person narrator who gives readers their glimpses into the characters' points-of-view, definitely prevented intrusive overwriting. Stockett thus set up boundaries for how much she could tell readers through a character's own mouth and still sound natural. After all, Minnie would be the last person to confess her vulnerability to others; she doesn't even show weakness to her best friend in the story.

Writing is as much what happens ON the page as what happens OFF the page--in the reader's mind.
Posted by Susan L. Lipson, Author & Writing Teacher at Thursday, February 02, 2012 No comments: