My 12-year-old student, A.L., who wrote this memorable poem was inspired by another poem, which I read to her, "Grass," by Carl Sandburg (click on the poem's title to read it). A.L. was deeply moved by the idea of the grass growing innocently and beautifully over the very grounds upon which battles occurred, grounds that were soaked in blood before they were covered by green. I am so impressed by the depth and drama of  her "The Man in the Moon" that I wanted to share it with you as further proof that poetry prompts some of the most introspective writing. 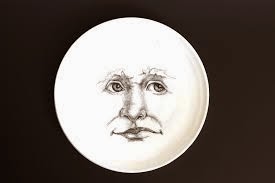 The Man in the Moon
by A.L.

The Man in the Moon looks at the green-blue planet below him,
And can’t help but think,
That through all of its beauty,
And all of its brilliance,
There are things that clash in the World of Man.
The Man in the Moon can’t help but see,
With unblinking eyes,
The battles and bloodshed that have passed by,
The shots that echoed around the world,
The Declaration of Independence,
The Battle of Gettysburg, of Clouds, of Bunker Hill,
And the Man in the Moon wonders,
“How can brothers turn on each other without a second thought?”
But he cannot close his eyes,
As he watches families brutally destroyed,
Because of different loyalties and of switching sides,
He sees the bodies of fallen soldiers, lying broken and at peace,
Painting the once green grass an ugly shade of red.
The Man in the Moon cannot talk, nor say prayers for the dead,


Instead, he weeps rays of moonlight.

HE WEEPS RAYS OF MOONLIGHT. WOW.

PLEASE leave a comment below for this talented poet!
Posted by Susan L. Lipson, Author & Writing Teacher at Sunday, June 22, 2014 No comments:

A lesson in character development based on a character's desires or fears turned into a prompt to create an invented phobia, which students had to name, based on Latin or Greek roots (as most phobias are named). The phobia had to launch a story that revealed the phobia via a scene in which a character displays the fear, and then faces ridicule or questioning from others, and either overcomes or succumbs to that fear. Here is an exemplary story by a 12-year-old author, S.V., that uses a very strong voice, lively descriptions, and a great sense of humor. Enjoy this peek into "somniphobia"!

Sleepless
A story about “Somniphobia” a.k.a. “dormaphobia”--the fear of sleep
by S.V., age 12

I stood inside of Bailey’s house, faking laughs and smiles, and wondering for the 50th time why I had agreed to come to this stupid sleepover. I had TRIED to tell Bailey the one thing that no one other than my family knew, the reason I didn’t want to go to her sleepover, but with Bailey screaming and ranting about how best friends HAD to come to each other’s birthday parties, I couldn’t get a word said. Bailey just wouldn’t let me tell her about my fear of… of… sleep.

Some people call sleep a refreshing time that gives your body rest. I call it death’s child in disguise. You can’t blame me! Not after having to see my grandpa, fall asleep, and never wake up. Not after watching my little brother lose the use of his whole body because he went to sleep. After those two experiences, I thought of sleep as death, beckoning me, drawing me closer and closer. Every night, as soon as I got sleepy, I’d start sweating and getting anxiety attacks. Doctors and psychologists just couldn’t understand my hatred of sleep. But that was back then. Now, I have to do a bunch of things before I go to sleep in order to avoid anxiety attacks… things that I CAN’T do at a sleep over.

You tell me. Would you be able to sit down in the middle of a sleepover and start meditating, while 7 other girls watched you, wondering what the heck you were doing? How would you feel when you had to wake up every hour with the alarm on your phone just so that you could make sure you weren’t dead or paralyzed? How would you feel if you knew that sooner or later, your “best friend” was going to stare at you in disgust and pretend she didn’t know you? But here I was, inside of Bailey’s house, watching the clock apprehensively as I awaited 11:50, ten minutes before the time when Bailey said we would sleep, and therefore the time I needed to start my meditation. Then the time came, and I KNEW I had to start now, but I just couldn’t humiliate myself. So I ran outside of the room, down the stairs, and into the living room. There, I plopped onto the ground and closed my eyes, starting to meditate. I heard the shouting upstairs stop gradually. Then, I heard confused whispers, and tiptoes down the stairs. I squeezed my eyes shut and fought the urge to jump up and pretend I had needed to go the bathroom. Now I could tell they were watching me.

All of a sudden, I felt someone shaking my shoulder. My eyes flew open to meet Bailey’s. “Amber! What are you doing? You’re embarrassing yourself AND me in front of all of my friends!” Bailey whispered, intensely. I shut my eyes and forced myself to ignore everyone. Just five more minutes. After I was done, I got up, brushed my hair away from my eyes, and walked up the stairs like nothing had happened. When everyone was back upstairs, they crowded on one side of Bailey’s room, the side fathest away from me. Bailey spoke up, throwing me dirty looks. “Okay everyone, let’s go to sleep now and forget about anything WEIRD and IDIOTIC that might have just happened. Everyone muttered with agreement, eyeing me suspiciously. We all fell asleep. Then, one hour later, my phone buzzed, blasting a One Direction song through the room and causing everyone to jolt awake. Everyone stared at me in disbelief. “AMBER! WHAT IS HAPPENING?” Bailey screamed in my face. Tears were threatening to spill down my face. I couldn’t do this. I picked up my phone, ran downstairs, and called my mom. She came to pick me up five minutes later.

As we drove away, I looked back at Bailey’s house, knowing that that was probably the last time I’d ever see it. That night, I couldn’t go to sleep.