After sharing a poem from Creative Kids magazine, "It's Not the Iron's Fault," by 15-year-old Joe Block, I asked 10-year-old Nathan to write his own personification poem featuring an object blamed for a person's errors. Nathan  immediately thought of a basketball getting blamed for a player's mistakes. I asked him to emulate the structure of Block's poem, which began with an iron pointing out its many attributes ("took the wrinkles out of your clothes"; "gave your clothes that special warmth"; and "made the clothes look as if they belonged to royalty") before the object poses questions to the human user of the iron about why she/he yells at the iron for ruining clothes, burning fingers, etc., when those problems arose from the user's misuse of, or neglect while using, the iron. 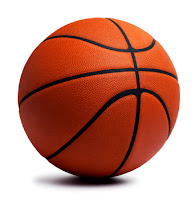 So the next time you scream at me,
think about all that I did for you.

When there was a fifty-fifty chance to go in
in a tight game, I decided to go in.

I was also the one who gave you enough backspin to make
that basket you thought you would make.

So why do you scream at me when I don’t go through the net?

Remember, you were the one who passed the ball
too hard to your teammate.

And remember when you lost control of the ball
and someone stole it?
That was you who dribbled too hard.

You’re also the one that controls me,
who gives me backspin,
so when you make a bad shot, don’t expect it to go in.

So why do you scream at me every time you lose the ball,
Or you don’t make a shot? All of that’s your fault.

So remember, it’s not the basketball’s fault,
If anything, it’s your fault.