REACTING AND CREATING TO DEEPEN LEARNING

As a poet myself, I teach poetry with the aim of imprinting admirable poems in my writing students' memories. I imagine my now young students (ages 8-17), as adults, looking through their old writing exercises from "the good old days in Mrs. Lipson's writing class," recalling vividly the poems we discussed and marveling at their old writings prompted by those deeply studied poems. The depth of most lessons depends upon a balance of theoretical analysis and practical application; and the more modalities of learning that we engage, the more memorable each lesson will be. I apply those educational strategies as I teach writing and poetry, hand-in-hand, to develop critical thinking, an appreciation of the power of words, academic writing skills, and creative writing abilities in a variety of genres.

My teenage writing students recently studied a thought-provoking, metaphorical poem, “Tuesday 9 AM,” by Denver Butson, which I found in an anthology of contemporary poems titled Poetry 180. (I highly recommend that book, full of excellent poems that I regularly use as prompts--just click on the title to go buy it at Barnes & Noble online). The poem takes place at a bus stop, where three people stand together, yet poignantly alone due to their self-isolating emotional states, depicted by rich metaphorical imagery. 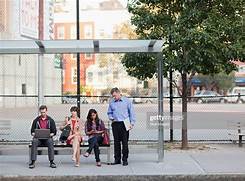 My students wrote academic-style analyses of Butson's poem, based on my guidelines to: a) establish a theme, b) illustrate that theme with quotations, c) explain how the quotations support the theme, d) interpret the implications “between the lines,” and e) offer an overall “take-away” message from this poem. The quotations had to be set up in context, for a reader—like you—who might never have read Butson’s poem, and each line had to build upon the one preceding it. Below is an exemplary analysis by an insightful eighth-grader named Christopher.

In the poem “Tuesday 9:00 AM,” by Denver Butson, the author describes three different people at a bus station, engulfed in their own worries and emotions. He begins by describing a man who is on fire, “Flames are peeking out from beneath his collar and cuffs.” The flames represent an intense feeling of anger or annoyance, rather than literal flames which could kill someone. The author continues by describing a woman who “wants to mention...that he is burning,” but does not because “she is drowning.” The second woman’s “drowning” is not in water, but rather in sorrow. By not commenting on the man’s flames, it shows that she is too worried about her own emotions, despite having the “water” to put out his “fire.” Moreover, whereas the first man’s anger was just “peeking out,” the woman’s sorrow is uncontrollable, “in her mouth and ears, in her eyes.” The last person waiting at the bus stop is another woman who is “freezing to death.” This person is frozen by self-consciousness and unsure of what to do. While she tries to melt her ice from the fiery man, her shy nature causes her to not seek help for herself. Furthermore, even though she wants to talk to the woman who is drowning, she is scared of potential judgment or retaliation, dissuading her from helping others. Overall, the author conveys the message that sometimes the help we need is right next to us, and it simply requires leaving one’s comfort zone.

The next part of my lesson required a creative response, in the form of either their own metaphorical poem about social interactions, or a fictional story that turned Butson’s poem into a short story, bringing each character to life and showing the reluctant or thwarted interactions between them. The students could change the outcome of Butson’s bus stop scene, if they chose to empower the self-limiting characters. Here is Christopher’s imaginative, moving story:

Before the Bus Arrives

As he was waiting at the bus stop, skimming the newspaper, he saw something that caught his eye. The headline read, “Man Arrested For Animal Abuse.” It began, “Florida man, age 27, was arrested for beating two stray dogs to death. On Monday, April 6th, Mr. Frank live streamed himself using a large stick to strike two stray dogs.” The man reading the newspaper was the owner of a dog, and upon reading these sentences, his blood began to boil. He would never dream of hurting his dog, but he still had nightmares of the time he left his favorite chocolate lying around.

Now the woman waiting beside him wouldn’t stop crying. The occasional whimper and moan escaped from her mouth, but she hastily swallowed them down. In fact, she was just fine mere minutes ago when she first sat down. She didn’t start until she checked a text message on her phone.

And to his further dismay, the girl sitting on the other side of him kept looking like she wanted to ask him something, only to look away when he turned toward her. Finally, tired of getting her sideways glances, he said, “Did you need something?”

The girl, surprised at first, responded, “Well actually, I wanted a look at your newspaper. You see, I wrote a piece for that publisher and I wanted to see if they had published it yet.”

Intrigued, he asked, “What did you write about?”

Eagerly, she began to talk about her studies, and as she was talking, it was almost as if she “melted” her frozen shell, a shell keeping her from speaking up.  In fact, she was talking so fast, he didn’t know if she was breathing. After he handed the newspaper to the girl, she whispered, “The woman over there looks awfully sorrowful. I wonder what happened.”

Although he was still angry, he felt keen to help. He turned to the crying woman beside him and asked, “Excuse me miss, I couldn’t help but notice you were in distress.  Is there anything I could do to help you?”

“I’m so sorry to bother you. My gran was in critical condition and I was just sent the news that she has passed. Thanks for asking.” As she finished speaking, she reached into her backpack and pulled out a bar of chocolate and passed it to him. “Here, I’m sure I must have been a nuisance crying so loud. Take this as an apology.”

Surprised, but grateful, he accepted the token of apology. And as the bus arrived, all three of them boarded, feeling significantly better.

I have shared this prompt and this student's writings to show, not tell, how teachers and students can explore literature not just by reacting to the words on the page, but also by using those words as a springboard for creating. Have you noticed that "reacting" and "creating" are almost the same words, slightly scrambled?  The profound poems that some of the students wrote for this assignment will certainly find their way into another of my blog posts. I believe that this lesson upheld my long-time motto: “Inspiring awe for words and awesome writing.”

Thank you for your kind comments!